The Virtual Institute of Mambila Studies

The Virtual Institute of Mambila Studies seeks to collate and connect the different research and researchers with an interest in the Mambila people of the Nigeria - Cameroon borderland and their neighbours; their languages and the area in which they live. We take a broad view of Mambila, including other groups speaking related languages such as Kwanja, Vute, Wawa, Nizaa, Njerep (3 speakers at last count!) Twendi (35 speakers), Tep, and others. Our research is primarily of an anthropological and linguistic nature; abstracts or full texts of papers are available at the site. The currently available work includes reports on Zeitlyn's research on kinship and language and his annotated version of Meek's early ethnological work in the region, and Connell's comparative linguistic research and work on tone realization in Mambila, as well as a full bibliography of anthropological, linguistic, and related research on Mambila. VIMS was established by David Zeitlyn (anthropology) and Bruce Connell (linguistics). We would welcome your comments addresses below.

The following inline image acts as a link to photographs of the "Physical Institute of Mambila Studies" in Somié, Cameroon which has been the base for much of this research.

March 2020 New book on Mambila Divination. The image below links to the publishers website which includes a preview 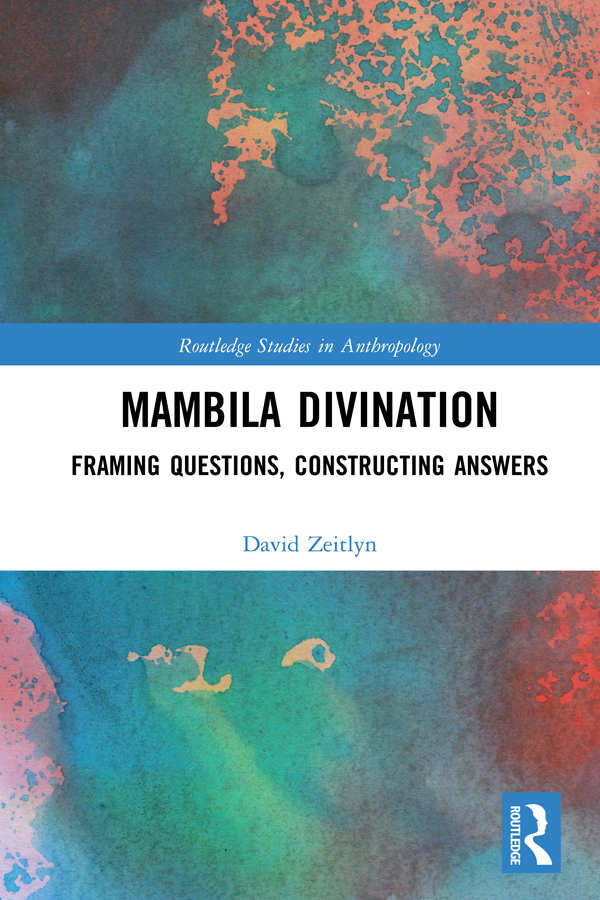 Some videos shot around Somié in December 2013. These include communal work to make a new road and dancing at the Protestant Church Harvest festival.

At last a solution to all the problems planning Mambila ritual: A calendar showing the traditional ten day week and the phases of the moon

Some Somié produced videos
"Women's sua in Somié 2012" now available online.
Video of Nggwun 2011 and a track from a 2014 album by Jean-Pierre Martino, released 2013. Placed online with the permission of the artist.

The Cameroon National Anthem in Mambila

The UNESCO Universal Declaration on Archives now in Mambila

A Kent Anthropology MSc in Ethnobotany, 2009 "Sharing Knowledge Intra-cultural variation of ethnobotanical knowledge and the factors that pattern it in a Mambila community in the Cameroon-Nigeria borderland"

In autumn 2003 David Zeitlyn gave the 2003/4 Evans Pritchard Lectures, All Souls College, Oxford: Sample of One: The life of Diko Madeleine and the History of Somié in the Twentieth Century Sound Recordings and background material is available online from the Diko Web pages


Words and Processes in Mambila Kinship

Monograph published in 2005. Words and Processes in Mambila Kinship: the Theoretical Importance of the Complexity of Everyday Life.

Other researchers known to be working on Mambila and related groups

Other researchers who have worked on Mambila and related groups

Other material on Mambila

Data on Mambila can be found at the following locations:

The works of Professor Farnham Rehfisch

The late Professor Farnham Rehfisch was the first anthropologist to conduct protracted field work among the Mambila (in 1953/4), and with the kind permission of his widow, Mrs A. Rehfisch, his material on Mambila (published and un-published) is being made available. This starts with a short bibliography of his work from where you can find the full text of some of his articles. The articles and fieldnotes are now available online as part of the ERA project

Other work on Yamba is listed in the Yamba online bibliography

Video by Samuel Finlak, photographer based in Atta:
View here or download from the following link

Links to other related sites:

Special issue of History and Anthropology on Archives and Futures

Bibliography of David Zeitlyn NB this is no longer updated. For recent publications see the Oxford webpage above

Link to David Zeitlyn Personal webpages
these contain material from Jonathan Zeitlyn, an early article by Bernard Benedict Zeitlyn, a scanned photo album from Rugeley and images of a digitally encoded clay tablet. They did have Alice Zeitlyn's 1988 thesis "MATURE STUDENTS in HIGHER EDUCATION: the Career of a Cohort of Mature Students in a Public Sector Institution" but this is now archived at ARRO so the duplicate has been removed.